It is possible to eat beef while protecting the planet. All you have to do is taste the meat from the Bio La viande rouge passe au vert Green Beef label, available in the Cactus aisles. Arthur Meyers, one of its producers, based in Hersberg, raises his calves according to the golden rules of organic farming: natural feeding and free-range rearing with their mothers.

Bio Green Beef. This name will surely ring a bell to organic enthusiasts who shop at Cactus. This label for young Luxembourg cattle is the pride of the supermarket, which participated in its creation with the help of the Interessegemeinschaft Vermarktung Lëtzebuerger Biofleesch (IVLB), the Administration des Services Techniques de l'Agriculture (ASTA) and Convis, a livestock and advisory cooperative, more than 3 years ago.

A farmer in the air of time

Now well established, the Bio Green Beef label is made up of some twenty organic farmers located in the four corners of the Grand Duchy who have joined forces to supply the thorny brand throughout the year. Arthur Meyers, who raises his herd from Hersberg in the commune of Bech, is one of them.

This small village in the west of the country is no bigger than a street and has less than 100 inhabitants. However, it is rich in nature. Halfway down its one and only road, a hillside lane surrounded by greenery leads to the Meyers family farm where Arthur, the estate's head farmer, is moving bags of seed with a small red tractor.

Consisting of a shed, multiple barns and fields where his cows can enjoy the fresh air, the farm, which dates back to "before 1800, although it has been renovated", forms its own little village. Arthur Meyers, meanwhile, combines fashion with work clothes. Underneath his long, padded blue coat with a brown collar, green rubber boots and a gray cap that stops above his ears, he wears a shirt, classic pants and bright red glasses. He is passionate, joking and hardworking. A teacher at the Lycée Technique Agricole in Ettelbruck, he looks after his farm with the help of his father and his family the rest of the time.

Arthur takes a bucket of seeds and sets off towards one of his fields. Around him, the landscape is green. The only other colors that can be seen on the horizon are those of the fruit hanging from the trees, the few flowers peeking out and the little chapel of Hersberg, at the top of the hill he is heading towards. When he reached the field, he climbs behind the wire, puts his feet in the mud and whistles.

As if by magic, about 20 cows appear at the bottom of the field and head for their farmer who then hands them their snack. "They only eat grass, but they get a little snack now and then. As I always say, the seeds are their chocolate", laughs Arthur.

The farmer values nature, his landscapes and his relationship with his animals. This is also why he is a member of the IVLB committee and why he supplies Cactus on behalf of Bio Green Beef with some of his 50 Limousin cattle, "the only breed I have and the breed that represents 80% of the label's production."

It was the IVLB, together with Convis and the support of ASTA, that approached Cactus about a potential cooperation. Indeed, the Luxembourgish supermarket is known for its collaboration with Luxembourgish agriculture. And the organic scene was not mistaken; Cactus agreed, a price was set and a specification drawn up. "This means we have a price for our product that we can live with and that is guaranteed throughout the year." As for Cactus, it has an organic, Luxembourgish and exclusive product. "So our relationship is sustainable."

Arthur Meyers on the birth of the Bio Green Beef project. 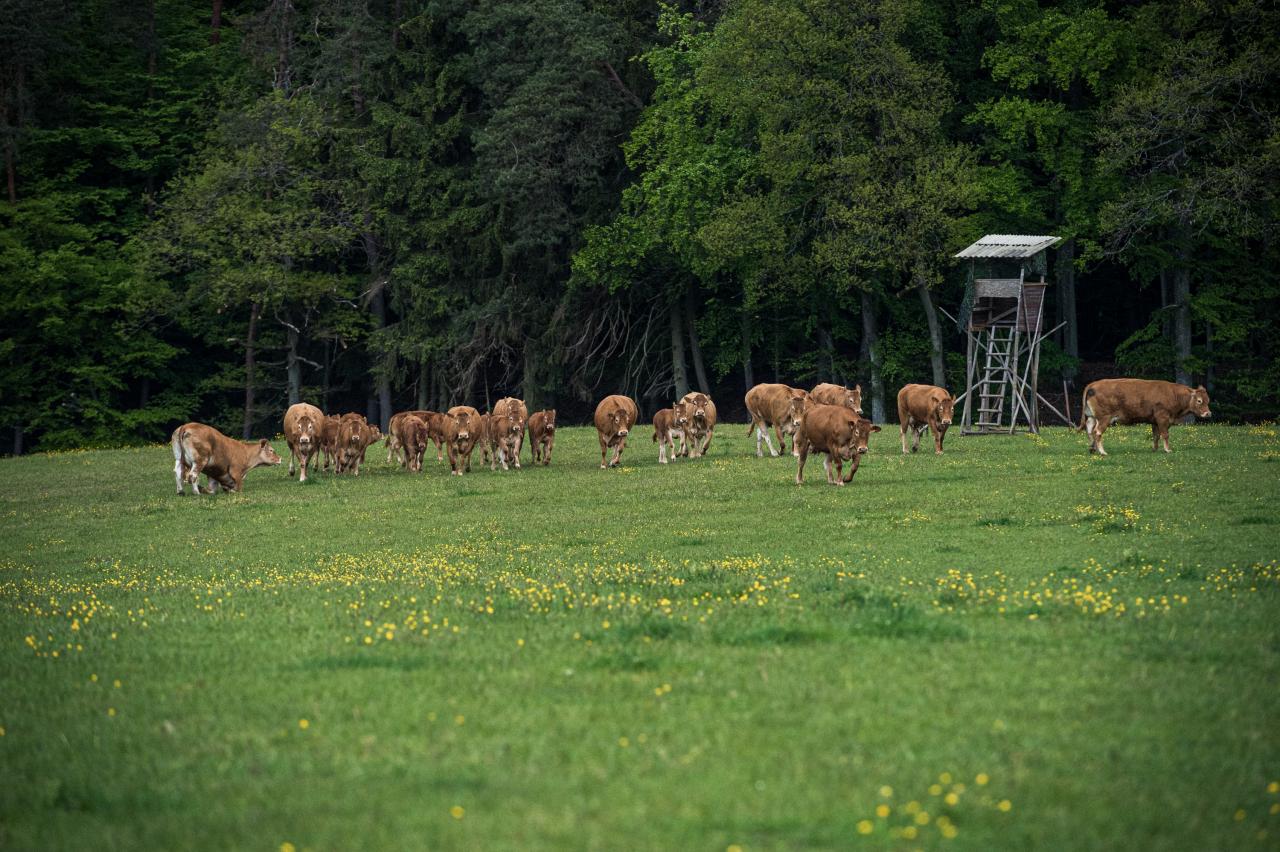 In addition, the supermarket is committed to buying complete cattle from the farmer and selling all the cuts in a range of products from steak to salsiccia to hamburger. It's a commitment that Meyers feels strongly about. "It's something very important that the customer is not aware of. They go to Cactus and say to the butcher, 'I'd like a piece of tenderloin', but the tenderloin is only 5 kilos of the animal out of 200. This is a real problem that we are trying to put an end to with Cactus." Indeed, in order for organic farmers to make a living and make their production profitable, the rest of the animal must also be able to be exploited and sold.

The production of an organic meat

Bio Green Beef is sold exclusively at Cactus, is produced in Luxembourg, fights against the waste of animal parts and is, as its name says, green and organic. But what exactly does organic mean? "The organic label comes from the feed, the relationship of the calf with its mother and the fact that the animals are outside if the weather permits. It also means that we don't spray pesticides or use synthetic fertilizers", explains the farmer before detailing the secrets of raising a calf on an organic farm.

"The organic label comes from the feed, the relationship of the calf with its mother and the fact that the animals are outside if the weather permits."

First of all, the cows and calves at Hersberg Farm were all born and raised there. "The only animal I buy is the breeder. He plays a very important role, as he will be the father of the next generations of the farm." So every 3 years, the farmer goes in search of a new breeding bull and to make sure he doesn't make a mistake in his choice, he pays attention to several criteria, including "the animal's ease of reproduction and its character, which should be as calm as possible."

Once the calves are born, their diet and the fact that they can be outside are crucial. In organic farming, animal production is linked to the land. "We have as many animals as our land can feed. During the summer, the animals' diet is grass, grass and more grass. Right now, they're all in the meadows." They also have haystacks available to balance their diet, which is eventually supplemented with some seed. "I give them seeds when I go to see them in the fields. It gives them energy and allows me to attract them so I can count them and do a health check. If one doesn't show up, I know I have to wonder."

Through grass and their mother's milk, calves get plenty of protein, a key ingredient. Protein is nothing more than "a composition of amino acids", which is the basis for the development of the calves' muscles. "I always explain it to my students with a metaphor. You have 21 amino acids just like you can have 21 different pieces of lego. One time you build a car and one time you build a house. It's the same thing here. One time the protein is in the grass and it helps it grow and one time it's in the cow, improving her milk and building her muscles and the muscles of her calves. So from green grass, we make red meat."

Finally, until Convis comes to pick them up to take them to the slaughterhouse in Ettelbruck, the animals stay with their mothers. "What makes this product special is that we have a calf-cow relationship that is completely guaranteed." Moreover, the calves are slaughtered at the age at which their mothers would naturally separate from them, avoiding stress and respecting the animals' well-being to the maximum: "8 to 12 months with a weight of 200 to 230 kilos". It is therefore a relatively young meat compared to other ranges on the market. "That's why it is so tender, although it is less intensive than if it were an older animal. " This type of meat, "widespread in Austria, Switzerland and France, although not yet very well known in Luxembourg, is also the most sold directly from the farms, because it is tasty and easy to cook."

Arthur Meyers on the meaning of the organic label. 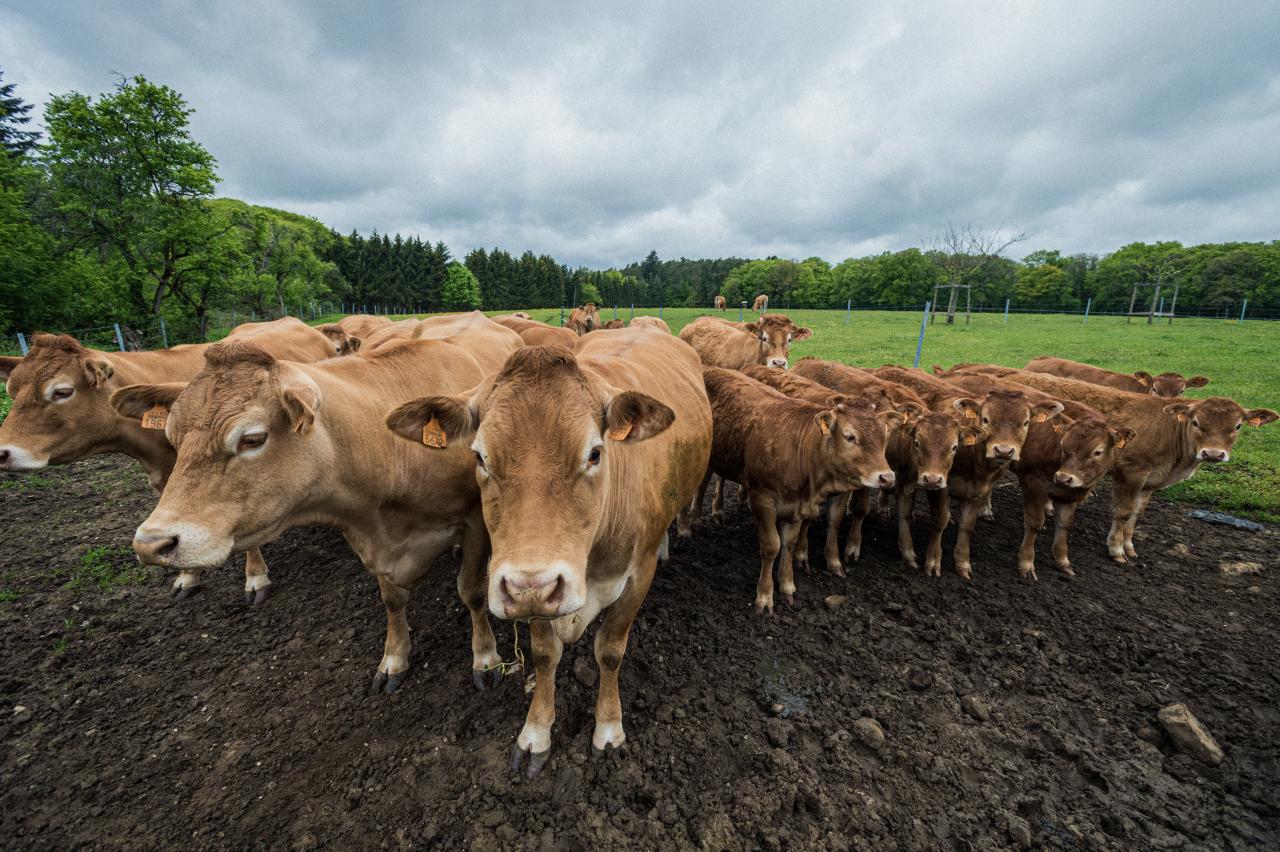 The secret of Arthur's organic farming lies in the creation of a "complete and closed circuit". "This is what makes our production sustainable. We produce everything ourselves and nothing from outside comes in except 500 kilos of minerals that we add to our seeds per year and the fuel oil for my tractor which, in terms of energy, is compensated by my photovoltaic panels."

At the moment, the IVLB producers deliver "four animals a week" to Cactus, but "since we work with veal and cows, we have a certain seasonality in production. So the product is "not the same every day". "We have a lot of calves in the spring, some in the fall and less in the summer. "However, since the label has decided to sell young cattle, a denomination that designates that the animal is between 8 and 12 months old, the farmer has "4 months that give a little flexibility" to the process.

"I believe we should eat less meat, but better meat."

Organic farming therefore requires a certain degree of trust in nature and is therefore not an exact science. This is reflected in its prices, which can sometimes repel the customer. For the farmer, "we should eat less meat, but better meat" and "if the customer wants sustainability, she or he must be prepared to pay the organic price." Leaning against a haystack inside his shed, Arthur illustrates his point with "an old Austrian campaign ad that compared the price people put on their meat to what they spend on food for their pets" and makes a final appeal to customers.

"We're doing everything we can. Soon, our meat packaging will be 100% recyclable mono plastic, we will not add soy to the feed and we are protecting the green areas of the country, but we need the support of our customers. Otherwise, we won't make it. If they buy Argentine beef, they are doing something for the pampas, but not for Luxembourg."

So it's simple, "to keep our green culture, we have to consume local". Eating organic and Luxembourgish meat is not only healthier for our bodies, but also a step in the right direction for the climate and for the biodiversity of the Grand Duchy. Bio Green Beef makes this possible and is waiting for you on the Cactus shelves.