This Sunday, the exiled Svetlana Tikhanovskaya arrived in Luxembourg for talks at the EU Foreign Ministers’ council. Lëtzebuerger Journal talked to the de-facto president-elect of Belarus prior to her meeting the local authorities and establishing for the first time a sustainable line of contact between Luxembourg and the democratic people’s movement of Belarus.

This article is provided to you free of charge. If you want to support our team, subscribe!

Over 50 exiled Belarusians in Luxembourg waited for two hours in the heat of an overcast summer’s day, anxiously waiving their flags in the damp June heat. One of them young people who kept singing opposition and folkloric tunes from Belarus was Aliona A. “The repression in Belarus has reached a level where the diasporas are becoming a vital and a last visible part of the protests.” She argues that it’s almost impossible to win the protest in Belarus alone and the pressure from outside will most likely help to break the stalemate. But  we need to cut the interview  short,, Aliona, the young professional from Minsk can’t wait to meet her exiled president. It’s shortly after 5.15 pm, “President Sveta” as Belarusians affectionately call her, arrived at the Place de la Constitution, to meet the community. The people break out  in jubilation and affectionately shout “Sveta, Sveta” her nickname. For 45 minutes Svetlana Tikhanovskaya took time to listen to the diaspora, their plight and their stories. She listens almost reverently, people talk calmly, some of the exiled Belarusians fight off their tears. While she listens to stories of people leaving their home country behind and being forcibly expelled from home, or stories of people who faced severe punishments and repression fled their country. One woman notices, “a real Belarusian is a person who has been unfairly put into jail at least once in his life!”

Lëtzebuerger Journal: Madame Tikhanovskaya, welcome to Luxembourg. You’re in the Grand Duchy for the first time and after meeting so many heads of states and European politicians you will get the chance to talk to the Foreign Minister and the Prime Minister. What are your impressions of Luxembourg and what do you expect to achieve here?

Svetlana Tikhanovskaya: First of all, I will meet with the Foreign Minister of Luxembourg for a general update on the situation of Belarus, this will be a meeting to discuss common ground, opportunities  and chances of working together. Luxembourg has been active in a coalition of other countries to put pressure on the regime in Minsk and the political entourage of Lukashenko. We are now actively looking for allies and opportunities to help our people with technical assistance: As you know, so many journalists, the bulk of the civil society, workers and scientists have been banned or fired from their jobs, their activities were disbanded and prohibited. Luxembourg could have a role to play, as one of the wealthiest countries in the world in order to help support these people that have lost everything.

When meeting with foreign leaders and diplomats are you reporting only on the current situation or also offering a look into the future of Belarus?

We also especially want to talk about the future of Belarus and look forward: Luxembourg has a huge know-how in how to build economic partnerships and we believe we can proactively work together with Luxembourg to invest into the future. Luxembourg is definitely already an ally of the free people of Belarus through their alliance with the European partners but we’re also here to deepen that bond. We are here to build connections and bridges.

Like many European countries, the government Prime Minister Bettel reacted very swiftly condemning the hijacking of the civil airliner carrying Roman Protassevich and his wife Sofia Sapega. These sanctions against the Belarusian regime came quicker than sanctions for instance against Russia, where Luxembourg also seems to be more hesitant?

We are here to talk and deepen our relationship and not to talk about Russia: Luxembourg just like any other country, can have close economic, trade and diplomatic relations with any country, whether it's Germany or Russia. Allow me to remind you that we’re here to talk about the Belarus agenda, and we’re here to talk about how these sanctions will look like and how they are being put into place. For ten months, we tried through different diplomatic channels and appeals to change the regime in Belarus. We used official channels, the UN, the OECD, private and business contacts but it was utterly impossible to even get the regime to listen. They did not listen to diplomats nor to anyone else: It’s important to notice, that the regime has brought these sanctions on themselves. They made the European Union do this, and left them no choice, because the regime simply did not even listen to any proposal.

“Luxembourg could have a role to play, as one of the wealthiest countries in the world in order to help support these people that have lost everything.”

You’ve visited so many countries and everywhere  you go you meet up with the Belarusian Diaspora. How does it make you feel to meet such tremendous support for your cause no matter where you go?

While traveling to different countries, this is always the most pleasant moment of my visits. I’m so grateful to be able to listen and hear the voices of these people, because it is them who made it possible to keep the Belarus protest visible and in the media. The fact that all these diasporas united last summer to form one voice and  support people in Belarus is a wonderful thing. People in Belarus need that support, because they are suffering so much and for almost 300 days now, the diasporas are sharing the same pain, because we are all Belarusians. We are so thankful for this moral but also financial support for our people.

During the next few days, you will work further on the future of Belarus and on the proposed sanctions. What does your agenda look like in the upcoming days?

We will in the next few days work together with the European Union partners on the sanctions list. They will present the list to us, we will be able to give our opinion and we will see what this sanction package can do. On one topic however I want to warn European Governments to remain very cautious and warn them. As you know we are fighting for the liberation of all political prisoners and prisoners of conscience in Belarus. My message is clear, don’t trade with political prisoners, we know from the past that Lukashenko gambled with the life of prisoners against the lifting of sanctions, but our precondition is this: Everybody has to be released. There are no guilty people in jails in Belarus and we won’t allow that Lukashenko to gamble with 10 or 15 prisoners to release them. 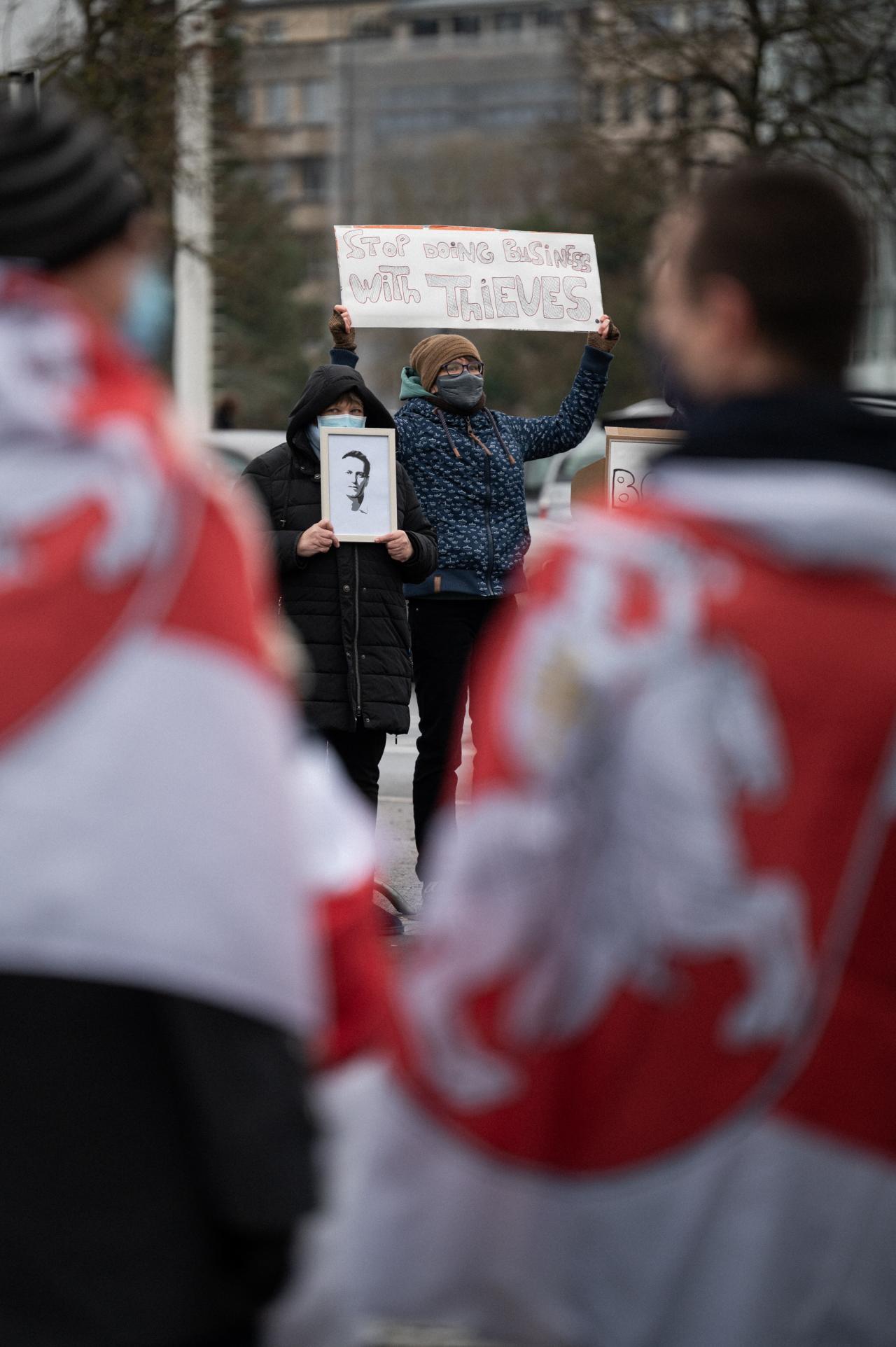 There are 9 million New Year’s wishes in Belarus