A piece of Luxembourg: this is how Yves Sand, one of the farmers of the 'Cactus Rëndfleesch vum Lëtzebuerger Bauer' label, describes his meat. A 100% Luxembourg product, this bullock beef available in the Cactus shelves is not only of very high quality, but also raised at the consumer's doorstep.

Meat is a sensitive issue. Although meat lovers love it, its origins and production are too often a mystery. Not anymore. Or at least not on the Cactus shelves. With its label 'Cactus Rëndfleesch vum Lëtzebuerger Bauer', the thorny brand guarantees its customers a meat made in Luxembourg of very high quality.

Present on the shelves of the Luxembourg supermarket since 1995, this beef celebrated its quarter century in June 2021: 25 years of success. In its ranks, the label counts "153 to 155 activities in the Grand Duchy", estimates Yves Sand, farmer of one of them since the very first day. From his farm in Bettange-sur-Mess, he is committed to good meat, animal welfare and local production.

Located in the middle of the street of Dippach, his business is hidden behind a long brown building. Between it and the farmer's house, a small hillside path leads to the stables and sheds. There are 6 of them in all and each one is cleaner than the other. The farm is peaceful, in the middle of nature and open. It doesn't even smell bad. You are cut off from the world, in an sort of bubble.

In the distance, Yves Sand arrives. Dressed in a red polo shirt and blue pants, he looks good even in his work clothes. It's time for a coffee break. His father-in-law and one of his uncles will soon join him. "We're a family business. I took over when I graduated – I'm the farm manager, but a lot of family members work with me."

Yves Sand, his uncle and his father-in-law

Indeed, Yves has a dream team around him, packed with experience: his two uncles who are pensioners, his father who helps out from time to time, his two brothers among whom "one is more animal leaning and the other more machine leaning" and his father-in-law who is a former veterinarian. "My father-in-law sees straight away if something is wrong. Not a day goes by that he doesn't take a tour of the barns." Besides, here he is. "Let's go see the farm!"

Smiling and happy to show off his barns, he first stops in front of a huge field that couldn't be greener with beautiful brown horses galloping around. "Some of them belong to my father-in-law, it's his hobby. Further on is the first stable. His animals, more precisely the bulls, are all poking their heads out of their stalls and jostling to get in front of our photographer's lens.

Each bullock has red or green markings hanging from its ears. One on the left, one on the right, and numbers are written on them. "It's their identity card" laughs the farmer. "With this, you can tell everything about the animal at once. If it's been sick, etc." This allows him to keep an overview of each one.

"It's a piece of Luxembourg, a local Luxembourg production: It says 'LU' in big letters on my meat."

As a very young bull with the number 14 and just emerging horns tries to make its way to be photographed, the whole scene is painting-like. The yellow of the haystacks on the second floor of the barn mixes with brown and white, "depending on the breed, Limousin or Charolais", of the animals. On the roof hangs a kite "to scare the birds that come to eat our food, but they are not stupid – they quickly understood" (laughs). An apple-green tractor is parked behind us and the blue sky lets us see a beautiful sun.

"Of all my cattle, 98% go to Cactus. The remaining 2% don't meet the label criteria, so I can't keep them." At one time, Yves Sand's farm produced milk, but that is no longer the case. Today, it only has bullocks and only delivers to Cactus. His production is limited to meat and feed for the animals to which "we only add proteins that come from elsewhere, in Europe."

Yves is in love with his farm and what it produces. Being able to be part of the Cactus label, a collaboration that was done through a commissionaire, is not only a financial boon for him – "We slaughter 2, 3 to 9, even 10 animals a week. It depends on several factors, but we are sure that they will end up in the Cactus shelves. It's an insurance!" – but also a tremendous amount of pride that's in line with his values.

Yves Sand about the meat he produces. 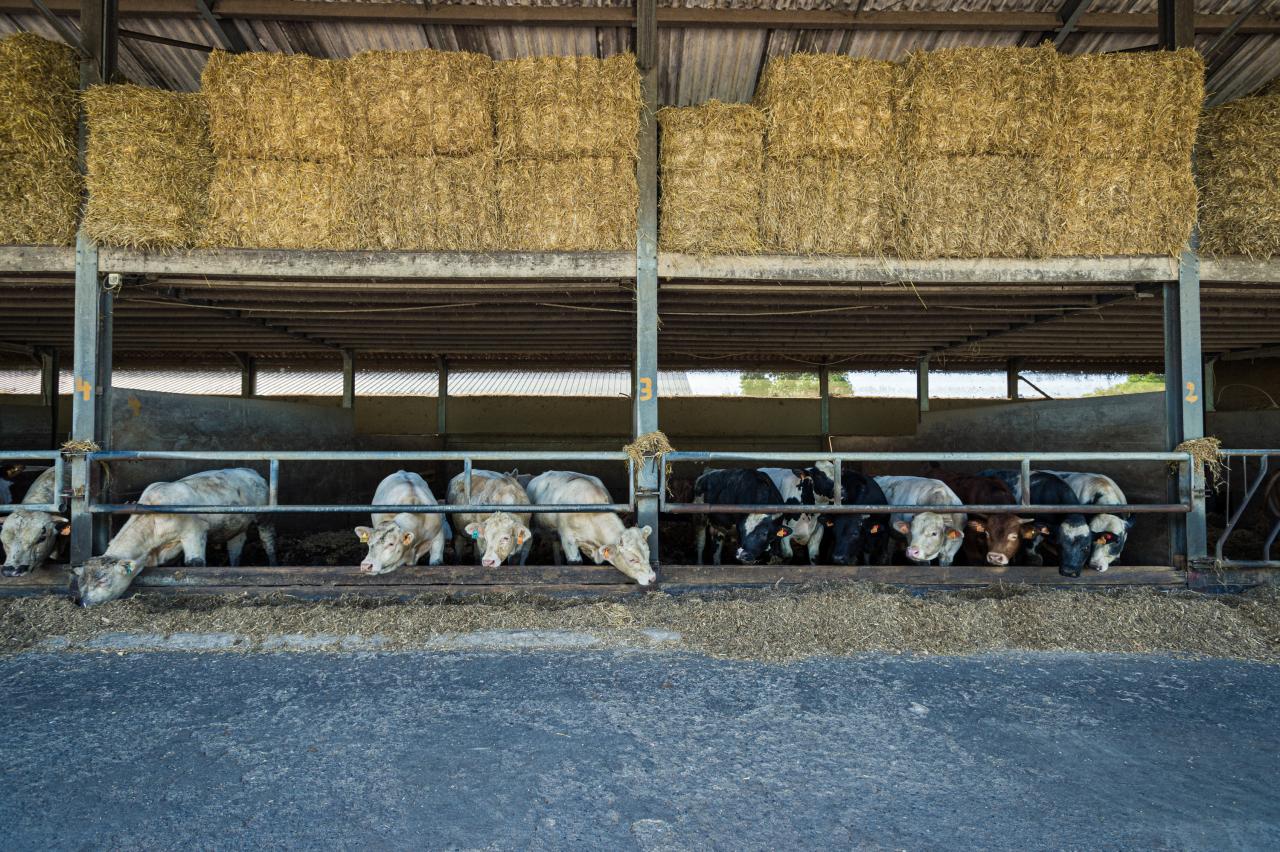 "That's for sure", says his father-in-law, who once again emphasizes the quality of their product. "In school, I had a teacher who said that 'quality equals demand'." Yves agrees, "in everything we produce, we have to stick to the Cactus specifications, which respond to demand. People want regional meat, produced at their doorstep. That's the case. I do my job as a breeder with all my heart. The success of our meat is also due to the energy we put into our work. I'm with my animals from start to finish."

The life of a bullock

Yves' bulls are not born in Bettange-sur-Mess. "My cattle are 100% LU. It doesn't matter if they come from Knaphoscheid, Dudelange, Schengen or Schouweiler. They are from Luxembourg. Once they are born, the farmer who sells them calls the commissionaire. He buys them, weighs them, puts a mark in their ear, registers them, vaccinates them and brings them to me."

When the young bulls arrive at the farm, "we put them in a quarantine barn, a new thing we decided to implement this year. The idea is to be able to observe them, to see if they are doing well, if they are not reacting badly to the vaccination and to give them time to acclimatise. Here, we work with a system of boxes of 15 animals. They arrive in groups of 15, 30 or even 45. It's a lot of stress for them and for us." At this point, the animals are "between 5 and 8 months old" and weigh "between 220 and 350 kilos".

Three to four weeks later, the bulls change cowsheds. They are put together in groups of 15. "We decided on 15 because that's what suits us best, but other farmers can of course work with stalls of 10 or 20. And the animals will stay together in their stalls, until the first ones become heavy enough to go to slaughter. "They leave the farm, separately, once they have reached 700 to 750 kilos. They are often between 15 and 19 months old at that time."

In total, the bullocks stay at Yves' farm for 6 to 8 months, and he insists that they live there "in the best possible conditions". "Animal welfare is a priority for us. As you can see, our farm is very bright, spacious and full of fresh air. We even have fans for hot days. We offer our animals maximum comfort. This is also a priority for Cactus and its customers. The specifications are imperative."

"Our animals are happy, that's obvious", adds the farmer's father-in-law. "We treat them well and it shows. When we were around them earlier, they heard your voices and weren't afraid. They were curious and came to you. None of them were hiding in the back of their stall. They are used to contact with people. Our animals have the skill set of a politician!" (laughter)

What about the animals? 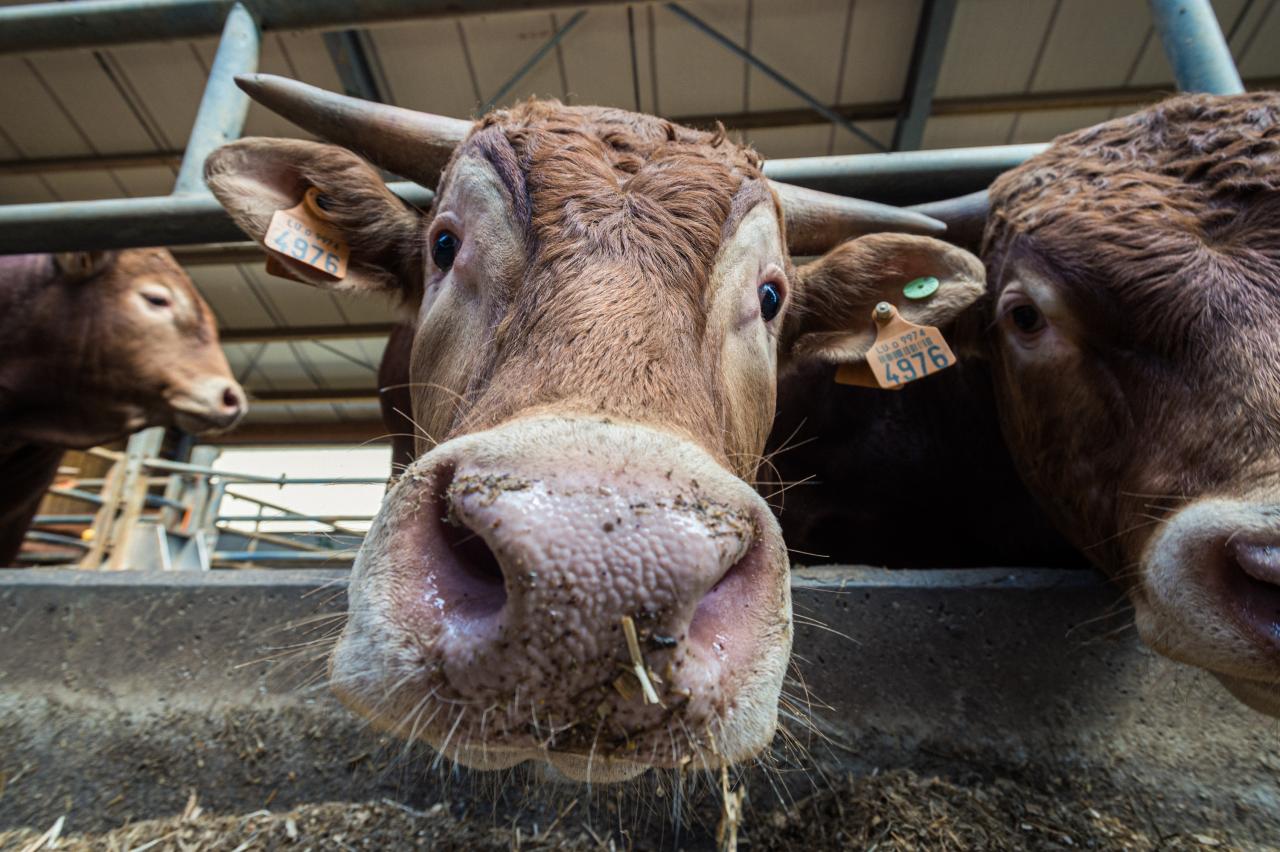 When it's time for slaughter, Yves brings (almost all) his bullocks to Ettelbruck himself. "If time does not permit, a commissioner takes care of it." But normally he stays with them until the end. There, a veterinarian checks each animal in detail before a Cactus buyer arrives and makes a specific price for each one.

As far as the feeding of his animals is concerned, the farmer of Bettange-sur-Mess also has a precise plan. The food changes according to the stages. "When the little creatures arrive, I don't know what they were fed before. Only cereals? All grass? So I only feed them hay for 10 to 14 days to clean them up from the inside out."

Finally, once their hay diet is finished, the cattle get the farmer's house mix. "We have two mixes, but both are made up of grass, corn, straw, wheat from the Bettange mill, rapeseed and our own barley. The first mixture contains more proteins, it aims at developing the carcass, the bones of the animals. The second is the finishing mix, which is more intensive and contains more corn so that they gain in meat."

"Obviously, we always refine according to the animal. We see how it is doing and how it is evolving. From then on, it becomes almost a pharmacist's job: 'A tablespoon more of this here, a teaspoon less of that there…' " (laughs) Through the food as well, the farmer gives special attention to each of his bullocks.

Yves' uncle arrives. It's time for them to get back to work, as a family. But after a day on the farm, one thing is certain: if the 'Cactus Rëndfleesch vum Lëtzebuerger Bauer' meat is as tasty as Yves Sand's love for it, his country and his animals is strong, we challenge you to find a better one.