Good taste, good shape and freshness: these are the three things that customers look for when they buy fruit and vegetables. In the supermarket, the third criterion often leaves something to be desired... Not at Cactus and its label Eist Uebst a Geméis. The Ferme Hilgert Frères in Kehlen, which has been a member since day one and produces apples, is proof of this.

It can be green or red. Crunchy and firm or grainy. Sour or sweet. It can be used to make a tart, eaten in the form of compote, in a gosette or simply on its own. It is of course the apple – the fruit of all fruits – and at Cactus, the shelves are constantly full and offer a wide variety.

To ensure that the fruit and vegetable sections of the supermarket never run out of supplies despite their success, a whole label is working hard. Eist Uebst a Geméis, with its twelve fruit and vegetable growers, aims for quality and freshness without compromise. The Hilgert Frères farm is one of them.

However, when you arrive at the home of the farmers Fernand and Georges Hilgert in Kehlen, there are no apple trees and no plantations in sight. Their little shop is in the middle of the main street of the village. It goes unnoticed, until Georges arrives. "Shall I show you our orchards? Follow me, we're going up to the Juckelsbësch."

We go on an adventure. Their apple orchards are slightly outside of Kehlen, and the roads leading to them are narrow and surrounded by corn fields and fruit trees. Further on, the road ends. The farmers' van follows a dirt road. A real safari. After five minutes of driving, they park and get out of their van. Behind them, meters and meters of land planted with thousands of apple trees sublimate the horizon.

The symmetry of the orchard in which their apple trees decorated with red and green apples are planted in onion rows for 250 metres and covered with a net to protect the fruit from the weather gives a feeling of peace that cannot be beaten. Nature in its purest form. It's as relaxing as the beach and the sea in the distance. "The difference is that at the beach there is sangria. Here there is work", laughs Fernand Hilgert.

The plantations are surrounded by fences, in front of which a small trailer has found a home. It is filled with all kinds of apples, juice and (potato) chips. The dirt roads open up to many bicycle paths, so hikers can stop for a snack. A nice houmourous touch.

Fernand and Georges go through the gate. At the entrance to the plantations, about fifty wooden boxes are stacked one on top of the other, forming a sort of pyramid. Some of them are filled with apples and others are empty, they are all dated from a different year and marked with the name Hilgert. Opposite them, an old white caravan with a table and benches is parked. The pickers spend their lunch breaks here during the picking season.

"Do you want to see the green apples or the red ones?" The farmers' passion for their fruit is quickly apparent. They are eager to show off every corner of their orchard and start with the history of their infrastructure "created in 1982 by a farmer who also supplied Cactus but off-label, whereas we only bought it in 2000", as Georges explains.

Unlike many farms in Luxembourg, this one has not (yet) been handed down from generation to generation; it is more recent. But that doesn't stop it from being a family business. "I started this business with my brother", says Fernand. "Today, our sons have joined us." The apple doesn't fall far from the tree.

"Our estate is 5.5 hectares and we have 3,000 apple trees per hectare. That's about 15,000 apple trees", Georges calculates. But he and his father don't just grow apples; they produce other fruits and vegetables for their own shop and raise "animals that also go to Cactus, for another label." Fernand adds that, on paper, they are also supposed to produce celery for Eist Uebst a Geméis, but that "the harvest was disastrous this year… so we couldn't deliver to Cactus".

For any agreement between company and supplier, a failure to supply would be problematic. But that's not how the Eist Uebst a Geméis label works. It sticks to its slogan: "Regional. Seasonal. Great." Seasonal means respecting nature and therefore the weather conditions that sometimes affect the harvest.

"We've been here since the beginning, and had already been producing apples for two years when the label was created in 2002. We launched it with seven other fruit and vegetable growers – three from Luxembourg, four from Germany – and Cactus, who trusted us." Today, four more farmers have joined them, bringing the total to twelve. The supermarket has the exclusive right to sell their products and still has the same confidence in them. 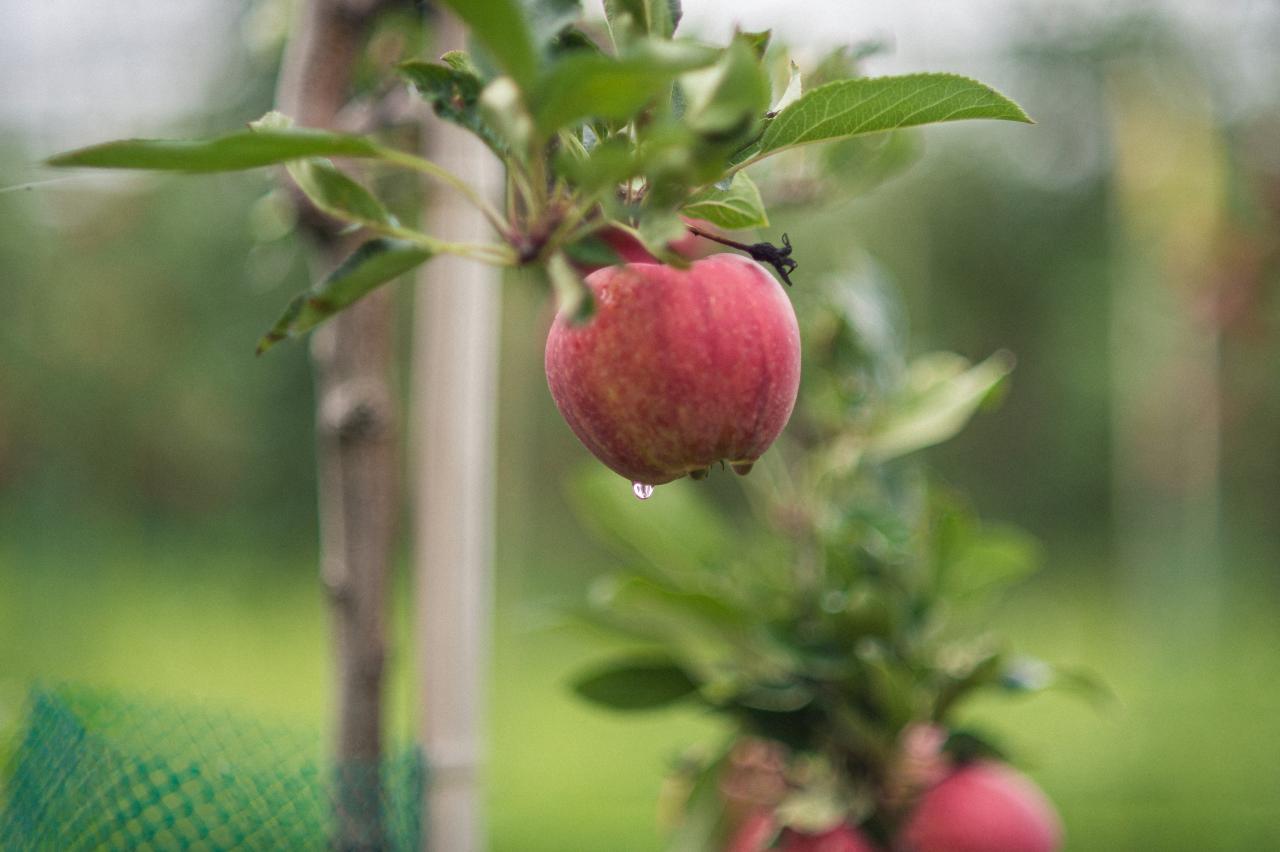 "Cactus pays us for what we deliver via a price per weight. The supermarket takes almost everything we produce, and if we have a bad year and can't deliver, they're okay with that." This takes a weight off the producers' shoulders; they know that they will use up their production and that they are safe in case of a bad harvest. For the customers, it is an assurance that nature and its conditions are respected to the maximum.

From flower bud to apple on the shelf

The arborists head for their plantation. They walk along it to find an entry point and stop at the first trees. Three passers-by stop at the gates and watch them pick apples. "You want some?", Fernand shouts, smiling. Of course they want some. Everyone likes apples. He gives them three, comes back and laughs: "So these old ladies have a little snack to continue their walk." They enjoy it.

The walk through the bands of apple trees begins. The path is covered with nets, it is like a labyrinth. Every time you turn your head, you discover something new. A bird's nest hanging from a wooden post, pheromone capsules hanging from the branches to prevent fruitworms and, above all, mouse traps in the ground. "Mice are a pain … They can eat the roots of a whole row of trees and kill them in a single day. That's expensive …"

And that slows down the production, as the trees are the starting point of the apple. The Hilgert's apple trees come from the Netherlands. "The normal life span of our trees is 15 to 20 years. When we have to replace them, there is not much choice: there are nurseries in Germany, Belgium or the Netherlands. We opted for the last solution", explains Fernand before his son adds that "these are all certified nurseries."

"When you grow apples, you think about the upcoming harvest and next year's harvest."

Once the trees are planted, "the apples start to bloom in mid to late April", but the work starts much earlier than that. "It starts already in winter with the cutting of the tree", explains Georges. "We remove the excess blossoms, those whose buds are not yet visible. That way, the old wood makes way for vital wood. Then, as the blossoming progresses, we identify which fruits are hanging on and which are falling off."

Based on this, they begin to take the first "corrective measures". These measures consist of "taking care of the trees so that they don't get sick, because a healthy apple tree produces bigger and better fruit. Fernand adds, "When you grow apples, you think about the upcoming harvest and next year's harvest. The trees have to be healthy. No one buys deformed apples."

Indeed, 'unattractive' apples are a real problem that Cactus and its farmers avoid as best they can. "When we say that Cactus buys almost all of our apples, it's because they reject some of them for their aesthetics. For example, we have fields without nets. When it hails, it bruises the uncovered apples so they are not saleable. The customers don't buy the less beautiful fruit… but we don't throw them in the garbage. We peel them, dry them and make apple chips out of them. That's plan B!"

Georges Hilgert on indicators that help to know when apples are ready to be picked.

There are other steps to follow to ensure that the apples grow well. "You have to be careful not to have too much fruit hanging from the trees, otherwise the next year you'll have fewer apples because the buds won't form as well. We leave 80 to 100 per tree maximum and remove the surplus. The small ones are thrown on the ground to make room for the nice, big apples, the ones that sell the best."

Arborists also have a technique to make their apples turn red and gain in sugar: "It's simple, apples turn red and become sweeter with the sun. So we make sure to cut the leaves around them to give them more light. It's one of the last steps before picking."

Finally, "5 or 6 months after the start of flowering, in September, we can start picking them. The exact time depends on the type of apple. We have several indicators to determine this. The colour of the seeds, which must be brown, a magic spray which, once sprayed on the flesh of a 'test' apple, colours it to determine whether it is ripe or not and, of course, we taste it because it first of all has to be good!"

It can take up to six weeks to pick their entire plantation. "We bring in Polish workers for that length of time in Luxembourg and they take care of it." By the way, here come the pickers. Like a small train, a red tractor just narrow enough to pass between the apple trees pulls two wagons of wooden boxes half filled with green and red apples. It is followed by two pickers who are busy harvesting them. They are unperturbed, and announce the beginning of the season.

"Once picked, our apples are delivered directly to Cactus or put in the fridge at home so that they ripen more slowly."

"Once picked, our apples will be delivered directly to Cactus or put in the fridge at home so that they ripen more slowly." Whatever happens, once the supermarket asks for delivery, the fruit is delivered in record time, thanks to particularly short journeys. "We do real regional … unlike in Germany where regional can mean hours of driving because the product has to go from the south to the north of the country", Georges points out.

Indeed, given the small size of our country, the apples arrive in the hands of the customer almost as quickly as in those of the three ladies who were watching the orchard of the Juckelsbësch. The farmers are just a stone's throw away from Cactus, whether they are Luxembourgers or Germans who are "at the border". This is the main strength of the product: its freshness.

Throughout the whole process, Cactus gives the growers all the freedom in the world. It regulates the products that promote the development of the fruit, as well as the infrastructure of its farmers and the types of apples recognized by the label, but it has total confidence in the ability of its fruit and vegetable growers to produce fruit and vegetables that are not only beautiful, but above all good.

So you want a fresh apple? No need to climb a tree. Golden, Gala or Boskoop, they're waiting for you at Cactus and, as crazy as it may sound, they've just been picked.