Studies forbidden to women, closure of her business due to the pandemic and sick leave caused by two surgeries in a short period of time. Pascale Seil had to overcome, and still does so today, many obstacles to be able to do what she loves: blowing glass. She is the heroine of a success story rich in twists and turns.

Luxembourg’s Little Switzerland is a dream destination, not only for Luxembourgers. The wild region of the Mullerthal is full of surprises that jump out at you with each new visit; rock formations, streams, waterfalls and… Pascale Seil’s glassblowing workshop.

Only a few kilometres from the “Natur- & Geopark Mëllerdall”, a succession of breathtaking paths lead to Berdorf, a charming village with an old, restored barn in the centre that is as exotic as the region that surrounds it. As a grey-fronted store with a minimalist “made by Seil” logo on the outside, it hides a real show inside – perhaps the only one allowed at the moment, as concerts, plays and other performances are temporarily banned due to the pandemic.

Indeed, at the back of this charming little glass store, the glassblowing workshop is accessible to everyone. Under large wooden beams, Pascale Seil, the in-house glass blower, welcomes us with a big smile as she works. Surrounded by windows, the sun rays light up the bright room. Right away, the glassblower’s love for her job is palpable; she is brimming with passion for glass. She may appear slightly shy, but she mostly stands back to let her work speak for itself. “I prefer close-ups of my hands working the glass to portraits”, she says before adding a joking “cheeeeese” to make the photo moment less uncomfortable for herself.

Pascale gets back to work because at the end of her cane, a hollow iron pipe, the previously picked glass cools down and is ready to be blown. She gets up from her bench, a large wooden chair with iron arms that allow the blower to constantly turn the cane, and crosses her workshop towards the furnaces. Today, she is working on a small piece and the molten kiln will suffice. For larger works, she will need to turn on the reheating oven. As far as colours are concerned, she uses a wide range of pre-coloured glass powders. Behind her kilns, there are more jars than you can count – a firework display of colours. Besides Aubergine, Lagune or Saffron, there is also the Whiskey tone that she has decided to work with this time.

The glass comes out of the oven and Pascale starts her umpteenth round trip through the workshop. “I heat up, I sit down, I heat up, I sit down… it burns calories. Once I get home, I don’t have to work out anymore”, she jokes. Back on her bench, she forms her piece of glass with a wooden mallet and a wad of folded newspaper that has been resting in water for an hour, while her assistant blows the glass. The air expands under a heat of up to 1,000 degrees: “Glass blowing is a real team effort.” Once the shape is made, a cut with the scissors is enough to detach the glass from its cane: the work is done. The polishing will come later.

Ceramics was the first passion

Pascale Seil goes up to the first floor of her store, which has 3 floors. Each of them overlooks the kilns. The place, which mixes different materials – notably wood, glass and concrete – is warm and pleasant. She feels good and proud of it. Her marriage with the glass is perfect. However, it could have never happened. Pascale Seil has had to overcome many obstacles in her life that have nevertheless shaped her as she shapes each of her pieces today: patiently formed, solid and meticulously detailed. These obstacles have made her a true Lady of Glass.

“Ever since I was a little girl, I have loved working with my hands and tinkering”, says Pascale. Since high school, she has followed this path and initially opted to study ceramics at the Lycée des Arts et Métiers. Once she had her CATP in Ceramics, she wanted to study at the Ecole des Arts Décoratifs in Strasbourg. She took the competitive exams there for a week and passed each test without knowing that the diploma she had obtained in Luxembourg did not give her access to the training she was aiming for. As it did not include a 13th grade, it was not considered a full-fledged baccalaureate. Fortunately, a teacher found a solution for her: start with the 3rd year of the cycle, the workshop work, and skip the first 2 years, the more theoretical part. She would therefore not have a diploma in decorative arts, but a document attesting to the knowledge she had acquired there. “That suited me”, she says. “Diplomas were not my goal. I wanted to learn something.” So, Pascale set out on this path.

“Ever since I was a little girl, I have loved working with my hands and tinkering.”

It was during her first year in Strasbourg, the 3rd of the cycle, that Pascale touched glass for the first time when a fusion furnace had just been built in the school. Only 7 students knew how to use it. “We blew the glass and it took the shape we wanted; I immediately saw that there was more to do and a trade to learn”, she explains. In addition, Alain Begou, a renowned French glass blower, came to share his expertise with the class for a week. As a result, Pascale fell in love with glass, which she says fits her impatient personality better than ceramics, because “you have to know what to make and make it right away; you can’t stop, but you see the result the next day.” Her decision to leave ceramics for glass was made.

A men’s discipline, then forbidden to women

“Glass is blown in Italy.” It was obvious to Pascale: her next destination would be the boot… or not. After being informed by the Italian Embassy in Luxembourg that, to study in Italy, she had to speak Venetian, Pascale fell off her cloud before she could even open a language book. “'But you’re a woman…that’s not okay.' Only men could learn to blow glass in Italy back then. Women could not.” Disappointed, but determined to make her dream come true, Pascale didn’t give up and turned to Denmark, a “more modern” country back then.

Pascale Seil on sexism in the glassblowing industry in Italy. 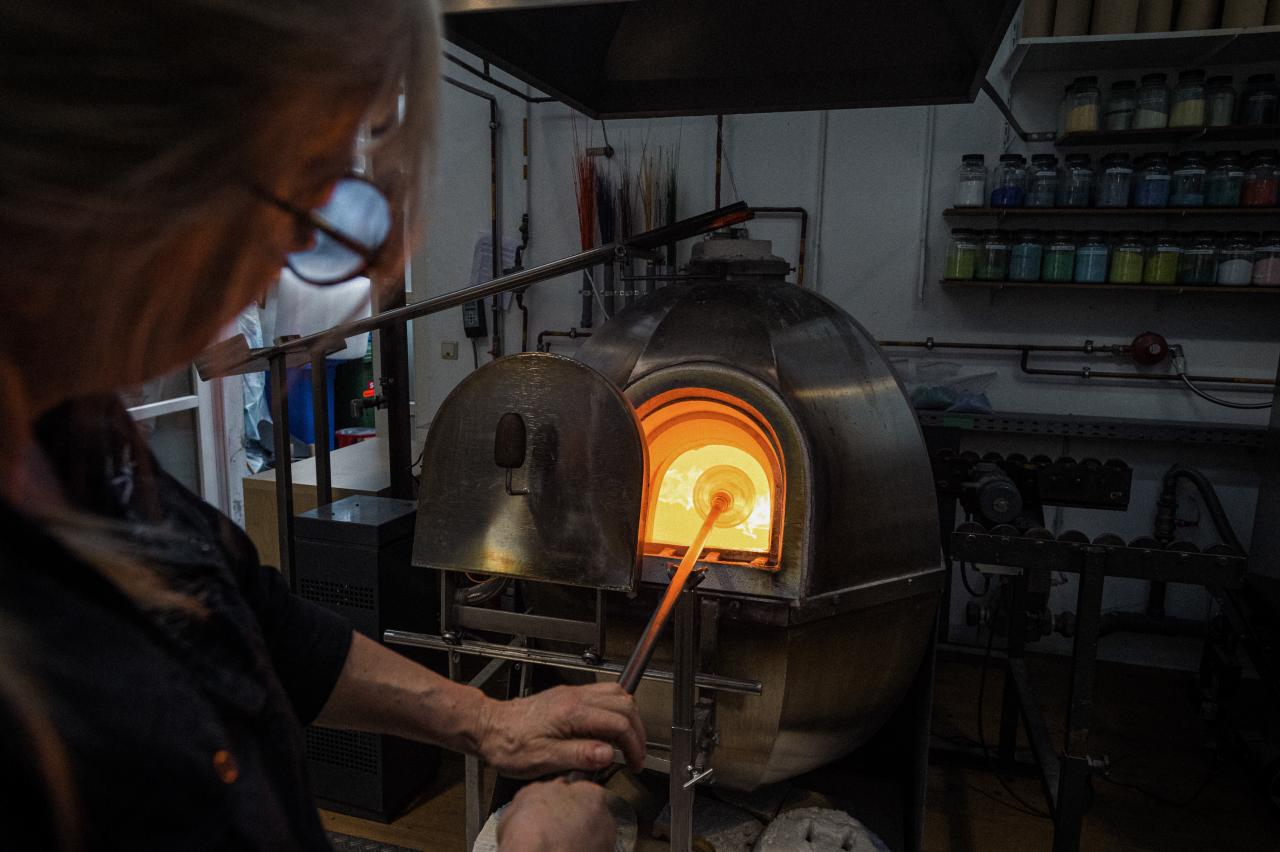 While waiting for the next school year to begin, Pascale went to work with Scott Slagermann, an internationally renowned American glassblower, in Saumur, France. She stayed there for a year before learning that a glass school would open nearby. She gave up Denmark and completed her studies with a degree in glassblowing at the Centre Européen de Recherches et de Formation aux Arts Verriers in Vannes-le-Châtel, France.

Back in Luxembourg, Pascale Seil set up her own workshop with the support of her family. Although it was difficult financially, it was worth it. Her parents believed in her and helped her to buy her current studio: a winning bet. They knew she was the type to “work until she dropped” and that’s what she did. “The first 10 years are a mess: there’s always a minus sign in front of the numbers. Then, after 10 years, it goes back up”, she analyzes today. “Eventually, when you know it will work out, the line is just a line.”

From her studio, Pascale Seil produces all kinds of glass works to sell as well as for exhibition purposes. Indeed, her pieces are sold from her store and other boutiques in the country and are exhibited both in Paris, where she exhibits in two galleries, including the “Not A Gallery” of the Dassault family, and in Germany. The pop-up exhibition of the association “De mains de maîtres” created by the Chambre des Métiers is also marked red in her calendar. In terms of inspiration, she lets herself be carried away by the forests, landscapes and colours of the Mullerthal as well as by her own and other artists’ work. “Everything you see, whether it’s here or on a trip, is a source of inspiration; it’s a blend of different things.”

“Everything you see, whether it’s here or on a trip, is a source of inspiration.”

The year 2020 and its confinement has been a thunderclap for the glassblower. She describes the moment when everything had to shut down as “horrific”. “You fall into a hole, everything stops and you don’t know what’s next.” Pascale is fortunate enough to be “of a certain age and have savings”. She adds that “if this had happened when I was young and had just started my business, I would have had to close it down. It would have been over.”

But that’s not the whole story. In addition to the Covid-19 situation, Pascale Seil had two surgeries that slowed, and even shut down, her business for several months in 2020. First, she had a spinal surgery in July, then she broke several bones in her hand while sawing a piece of glass in November, which forced her to stop until January 2021. But the moment she’s off duty, her entire business is on hold. “My assistants can’t do my pieces on their own. When I am sick, nothing works anymore.” The question then arose of how to pay them, as the coffers were empty following the confinement. The answer came from the Chambre des Métiers which helped Pascale to obtain partial unemployment benefits for her assistants.

Pascale Seil about the financial support from the Chambre des Métiers in obtaining partial unemployment for her employees during her sick leave. 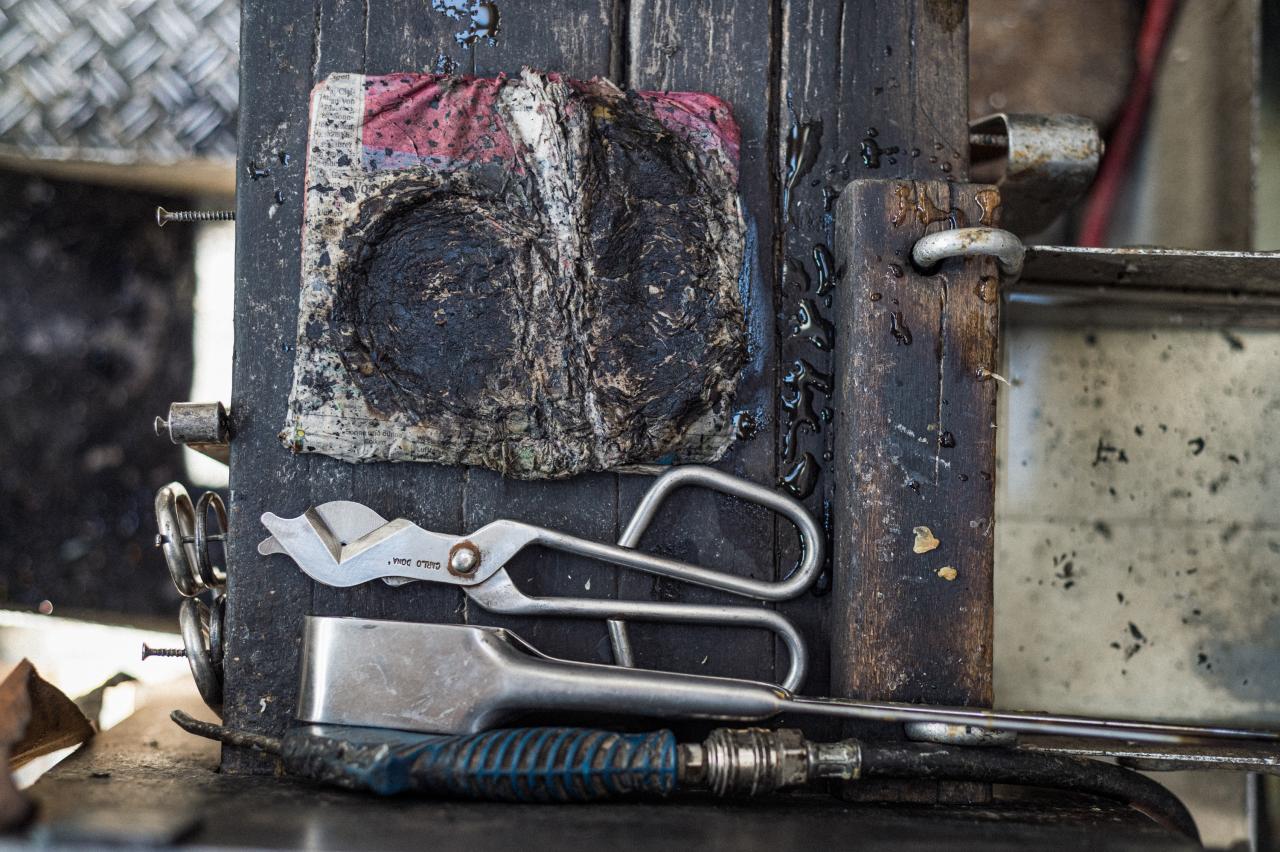 Today, 2020 belongs to the past and 2021 has started well. “Customers are ordering online or by phone and we can once again go to their homes to make custom fixtures.” Pascale Seil is also starting to think about the pieces she will present at the Luxembourg pavilion of the Dubai Expo. As for her studio, it is currently exhibiting the works of the painter Ann Vinck, is preparing to showcase the photographer Luc Ewen from July 4 to 18 and cohabits permanently with the jewelry of the goldsmith Annick Mersch.

Despite many setbacks, Pascale Seil has realized her dream and created her own little glass temple. “You must never give up”, she insists. “There will always be ups and downs on your path, but when you give everything you have, you will be successful in the end.”